ER: A Year in the Life

The ER: A Year In The Life relates both the joy and sadness that can be encountered while caring for patients and families in the emergency department. The book condenses a 16 year practice of emergency and critical care medicine into a single year timeline. Similarities between the caregivers and cared for are revealed in the telling stories within.

On any given night you can flip through multiple cable channels, where reality TV shows   medical providers involved in every sort of endeavor from treating a gunshot wound in the trauma center to performing an operation. They bring before the viewer those with cancer, those having a baby in the hospital, in birthing suites or assisted by midwife in the home setting. The personal world of all- doctors, nurses, and patients is now regularly the subject of a TV special or web video.

In some ways this is good perspective, we joke with the patients telling them that they have the best vantage spot in the busy emergency department. "We are better than TV," I joke. We are just like ER. Although, we are not as good looking and we do not make $1 million an episode." They usually laugh both young and old.

They share the commonality of their experience. Sometimes they chuckle and other times they are sad. The secret world of sadness, of death and dying, of lost hope and dreams has been revealed to the world. Often a difficult day is salvaged by least one positive event that restores balance, and so life goes on in the ER.

Rade B. Vukmir MD,JD is President of Critical Care Medicine Associates, a medical administrative and consulting enterprise founded in 1991. He is certified in Emergency and Critical Care Medicine, and has a degree in law with a certificate in health law. Dr. Vukmir has written forty-three medical journal articles, and is the author of ten books.

These works include The Mill (1999), Outcome of the Critically Ill: Medicine, Surgery and Trauma (2000), Airway Management in the Critically Ill (2001), Lessons Learned: Successful Management in the Changing Marketplace (2003), ER: A Year in the Life (2005), ER: One Good Thing a Day (2008), The Maximally Efficient and Optimally Effective Emergency Department (2009), ER: One Hundred (2012), Physician Contract Guidebook (2014); and Disruptive Provider Behavior: An Evidence Based Analysis (2016). 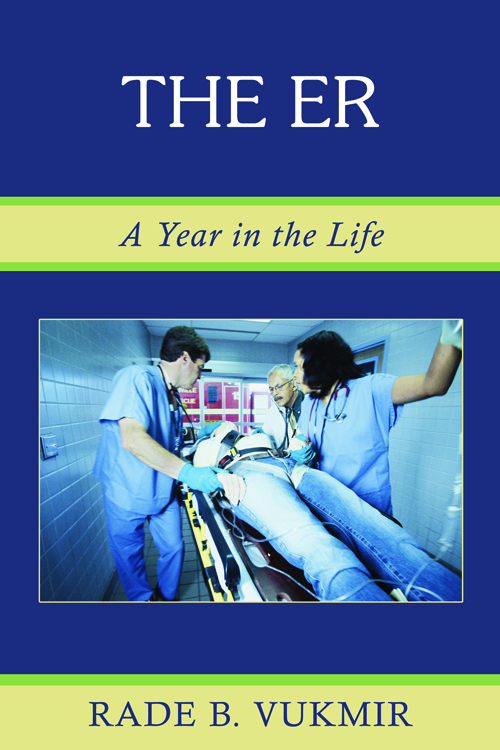